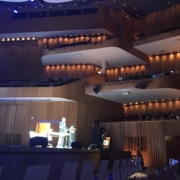 Day 2 was in our opinion the best day of the conference. It was literally packed with strongly technical, valuable content. However, the starting talk did not promise that at all. So, let’s start!

Power to the Programmers by Tom Gilb

Have you read our day one review? If so, you have probably noticed that we didn’t like Agile Value Delivery by Tom Gilb too much.

This talk wasn’t worse but it also wasn’t better. It was actually pretty the same! The same slides, the same commentary, even the same jokes.

What’s even worse is that this talk was kinda obligatory during the second day, because there was nothing else at the same time. So if you participated in the talk during the first day, you effectively lost one talk.

So, dear organizers: please consider this for improvement next year!

Crazy and Focused by Daniel Steinberg

This talk was rather about soft skills then technical ones. Moreover, the presenter specializes in iOS development, so one could think it’s not the best choice for Java developers but nothing further from the truth! It was full of both funny and touching stuff, full of emotions and well prepared. Simply – perfectly crafted. It was one of the talks you think about even a few days after.

Here are our takeaways:

We have so many different technologies, methodologies and ideas around. It feels that development is so easy nowadays that we don’t have to think, we just need to pick most popular ideas and follow simple rules. Don’t be mislead, it’s even more important now to wisely pick right tools to make the job done.

Adam talked about well-known modularization-patterns and practices and discussed with the attendees in an interactive way how they can be implemented today and if some are eventually already anti-patterns nowadays:

Essentially he was pointing out that most of the options for modularization we don’t need at all. We should focus on solving business problems and not increase complexity of the infrastructure, unless we really need to.

The talk was intended for a bit more experienced Akka developers. It covered — as promised — the experience gained and lessons learned by the speakers during their adventure with Akka.

We complained a little about first Ted’s talk, because it was not so technical. This time it was completely different. Ted’s great presentation skills were just an addition to strong technical content of this talk.

This talk was strictly technical. Venkat was showing pieces of code presenting Nashorn possibilities. Of course, the Venkat’s presenting style on its own would make this presentation awesome :)

Here are a few takeaways, though:

Gerrit Code Review or Github’s fork and pull? Take both! by Luca Milanesio

This talk was mostly about presenting Gerrit and comparing it with GitHub. Luca appeared to be very nice presenter. He did a great job presenting Gerrit and wasn’t scared off even by broken microphone :) The talk and product itself was so good that we decided to give Gerrit a try in our day-to-day work!

JavaScript Design Patterns was the last one for us during the day two of 33rd Degree 2014. We all were kinda tired but Pratik managed to put yet another spark of life in all of us. Kudos for that :)

The talk itself was really good prepared. Although we were familiar with most of those concepts, the way they were presented really helped to neaten them in our heads.

Actually, it was kinda similar with the last talk of day one… Maybe it’s kinda Conference Design Pattern to schedule recap talks for the end of the day :)

Here are main points we want to point out: